South African president, Jacob Zuma, has refunded over half a million dollars into government chest. The amount was in respect of non-security upgrades that were carried out at his private residence at Nkandla.

A statement from the presidency confirmed that he had paid the amount of 7.8 million rands ($538,000) to the Reserve Bank, adding that the president took a home loan from a local bank to settle the amount.

The VBS Mutual bank which granted the president the loan describes itself as a wholly black-owned specialist finance and retail bank.

President Zuma has paid over the amount of R7 814 155.00 to SA Reserve Bank as ordered by the @ConCourtSA in respect of#Nkandla 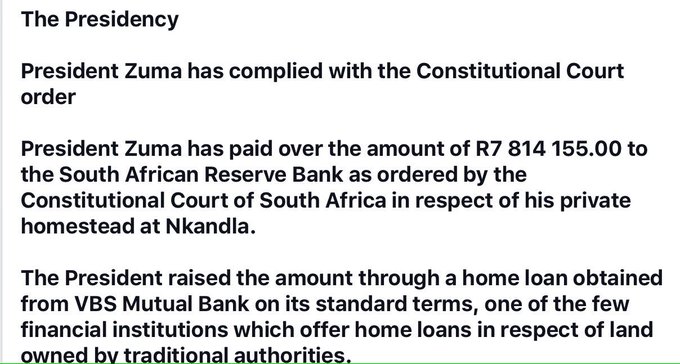 RT @AndiMakinana: President Zuma has paid R7 814 155. He raised the amount through a home loan from VBS Mutual Bank.

In 2009, soon after Zuma became president, upgrades began at his personal home in Nkandla, a small town in the eastern South African province of KwaZulu-Natal.

A 2014 investigation by the public protector Thuli Madonsela found the work done at the Nkandla residence went beyond beefing up the security infrastructure, as claimed later by some officials in the Zuma administration.

He was recommended to pay back some of the costs which he refused until the matter reached the Constitutional Court for ruling.

The landmark Constitutional Court judgment on the Nkandla refurbishment case ruled that the head of state had violated the constitution by refusing to pay the renovation costs of his private property, specifically those that do not relate to security.

“The National Treasury must determine the reasonable costs of those measures implemented by the Department of Public Works at the President’s Nkandla homestead that do not relate to security‚ namely the visitors’ centre‚ the amphitheatre‚ the cattle kraal‚ the chicken run and the swimming pool only,” Chief Justice Mogoeng Mogoeng said during the ruling.