Six packs are the things girls go crazy for. They are what everybody in the fitness industry strives to achieve. But for some reason Huddah feels that women should avoid men with six pack abs as she claims they have nothing.

In a detailed posts shared by Huddah – the former socialite throws shade at well built-men saying they have no money or any wealth whatsoever. According to Huddah this is because most tend to spend hours at the gym – forgetting to chase money which is the only currency that can pay up bills.

Judging from her posts, Huddah mostly aims at those with the ‘Johnny Bravo’ body; adding that they physical appears justifies the wasted period at the gym. In one post Huddah wrote;

Used to wonder why some guys look like Johnny Bravo. Now I understand it’s cause they have nothing in their pockets!

Having explored the streets before meeting her alleged Arabian tycoon; we would like to believe that Huddah is speaking from experience.

In yet another post, the former socialite goes on to add;

The best body a man can have is athlete body! Enough of everything. And as y’all can agree athletes or people who look like. Or people who don’t pull all their energy in the gym lifting have something in the pockets 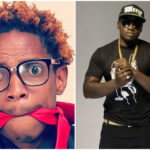