South African artists have voiced their discontent with the fact that Burna Boy, a Nigerian musician, is headlining an anti-xenophobic benefit concert.

Africa Unite Concert: What we know about the event

The Ministry of Sports, Arts and Culture, headed by Nathi Mthethwa, Channel O and Play Network Africa, have banded together to action President Cyril Ramaphosa’s promise that more work would be done to alleviate hatred for foreign nationals in South Africa.

The trio partnership confirmed that, in light of the events that recently took place, it was fitting to host a concert that aims to unite the continent against xenophobia and gender-based violence.

The elephant in the room is that Burna Boy, a figure that was central to the xenophobic divisions we saw on social media, is included in an event that is about unity.

In September, Burna Boy had published a string of ranty tweets, calling on foreign nationals living in South Africa to defend themselves against xenophobic South Africans. He had also warned rapper, Kiernan ‘AKA’ Forbes to never set foot in Nigeria without security again.

Burna Boy had even gone as far as claiming that he was never going to set foot in South Africa, ever again. However, things seem to have changed, two months later.

A collective of local musicians, cloaked under the Tshwane Entertainment Collective umbrella, sent a scathing letter to Arts and Culture Minister, Nathi Mthethwa, accusing the department of succumbing to Burna Boy’s demands in ushering him at the forefront of an anti-xenophobia event.

The gist of the two-page letter is that the group labelled the event a “financial exercise to benefit the very artists who have our country in a negative light based on false claims”.

“Whoever may have deemed that the country needs a PR exercise of this nature would have done so largely as a result of the callous, misleading and unwarranted incitement by this very artist. Not only did he spread falsehoods through his extensive platform, he literally incited violence and hate,” the letter read. 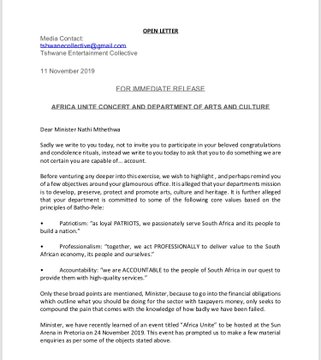 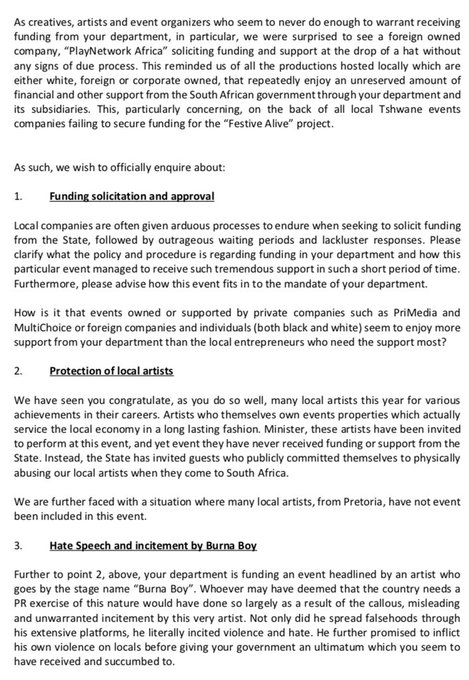 Dept of Arts and Culture distances itself from the mess

In response, the department’s spokesperson, Asanda Magaqa, said that, in fact, the Ministry of Arts and Culture has no involvement in the organisation of the event and that their logo was erroneously included in the marketing collateral.

“The department wishes to reiterate that it has not allocated or granted any funding to the event in question and any reports to the contrary are entirely false,” Magaqa claimed.

Burna Boy, seemingly unbothered by the cries heard from local entertainers, revealed that most of the proceeds made from the concert will be channelled to “victims of xenophobic attacks.”

“I really hope we can all keep contributing in our own way to make the world a better and safer place for each other. Africans unite, it’s bigger than all of us,” he wrote on Twitter.