South Africa’s Pretoria Girls High School management is facing a furious backlash after allegedly instructing black school pupils to straighten their hair. Reports say that the country’s Education authorities are probing the institution on the issue.

#StopRacismAtPretoriaGirlsHigh trending on social media topic on Monday, after videos and photographs of pupils protesting at the school one of the pupils sporting an afro‚ went viral over the weekend.

@Clint_ZA thoughts on White Afrikaners stopping Black Africans from having their Natural hair ???

I am an African @Clint_ZA 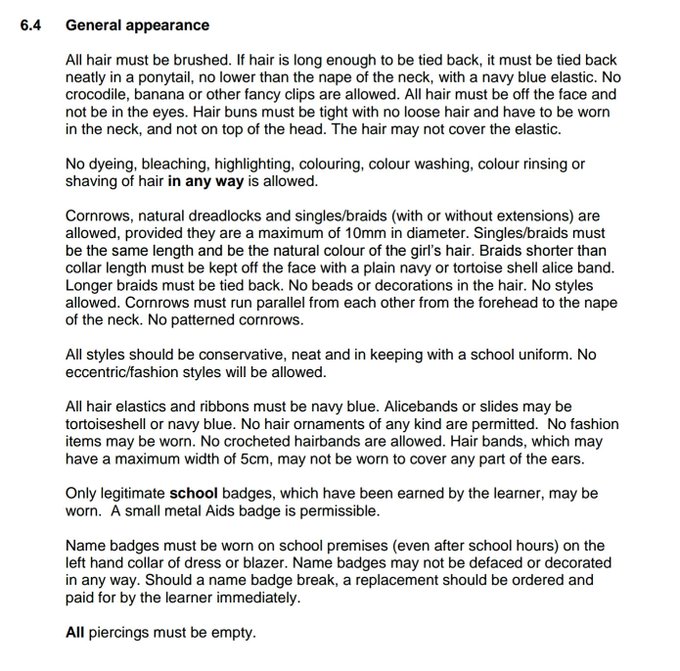 The girls say school rules forbid African hairstyles such as afros, bantu knots, dreadlocks and braids. They also claim they are not allowed to speak their mother tongue and that a teacher called them monkeys when they were singing and chanting in class, a media source reports.

There’s a petition for it

So far, a petition, which has gathered 5,000 signatures, has been set up asking the authorities to investigate the school.

The petition called on Gauteng province’s Education Member of Executive Council Panyaza Lesufi and the school headmistress to ensure that black and Muslim pupils were not discriminated against to protect pupils who protested against victimization and to take disciplinary action against teachers and staff who implemented racist policies.

According to Times Live, the school has a 36-page-long conduct code for learners, that does not specifically outlaw afro hairstyles. “All styles should be conservative‚ neat and in keeping with a school uniform. No eccentric/fashion styles will be allowed‚” it reads.

The hairstyle policy notes that hair must be brushed‚ neatly tied back if long enough‚ be kept off the face‚ no dyeing‚ bleaching‚ colouring or shaving, reads a Times article.

“Cornrows‚ natural dreadlocks and singles/braids (with or without extensions) are allowed‚ provided they are a maximum of 10mm in diameter. Singles/braids must be the same length and be the natural colour of the girl’s hair.”

South Africa, Africa’s second biggest economy held its first democratic elections in 1994 ending the cruel era of Apartheid, which was widely thought to also put to an end racism. But shockingly 16 years after the end of apartheid, racism has remained alive in the rainbow nation.

Reportedly in Northern Cape, there is a small Town whites only town called Orania. Critics accuse the town authorities of rejecting the Rainbow Nation concept, and trying to recreate pre-democratic South Africa within an enclave, while residents contend that they are motivated by the desire to preserve their linguistic and cultural heritage and protect themselves from high crime levels.

According to Relativy, racial discrimination remains widespread at most South African universities, despite many policies aimed at redressing the bitter legacy of Apartheid. In 2008 four students at the University of Free State made a racist video that created an international uproar. While during the same year in April, it was reported that black students at the University of Johannesburg had allegedly been assaulted by their white counterparts while at a university bar.

On the other hand, White students are also affected by racism. Relativity Online reports that in January 2007, Ernst Roets spokesperson of the organization Solidarity Youth ,was quoted by the South African Press Association (sapa) saying “White students were being overlooked in favor of poorly achieving black students in the awarding of bursaries”

Ernst said Universities were also discriminating against white students, denying them entry although they did better than their black counterparts.

An official at the South African institute of race relations, which is the leading independent research and policy organization in South Africa, is quoted as saying that racial discrimination will take some time before it completely fades out, since it started in 1652 with the arrival of the Dutch settlers.