South Africa’s presidency on Tuesday revealed that more than 400 officers will be conveyed to work with the police to ‘keep up peace’ amid the Opening of Parliament where President Zuma is to convey the State of The Nation Address (SONA) 2017.

The parliament has 400 individuals with an outright majority of  more than 240 belonging to a ruling party. The fundamental opposition Democratic Alliance (DA) have 89 seats while the militant opposition Economic Freedom Fighters (EFF) brags 25 seats. Ten other parties share the rest of the slots.

Zuma as part of his constitutional obligation presents a SONA address to the house at the beginning of each year. This year’s address is slated for Thursday February 8, 2017.

EFF have slammed the move to deploy soldiers is ‘a sacrosanct institution’ as parliament. They add that the move is akin to a declaration of war tasking the security forces to defy the President and stay on the side of the people.

The DA also condemned the move describing it as ‘militarization’ of the parliament. They have called a meeting with the speaker over the matter.

‘‘We condemn this initiative as the unleashing of the army on the people of South Africa. It must be seen as the declaration of War on citizens, which means Zuma is planning to murder those he disagrees with at the SONA,’‘ an EFF statement said. 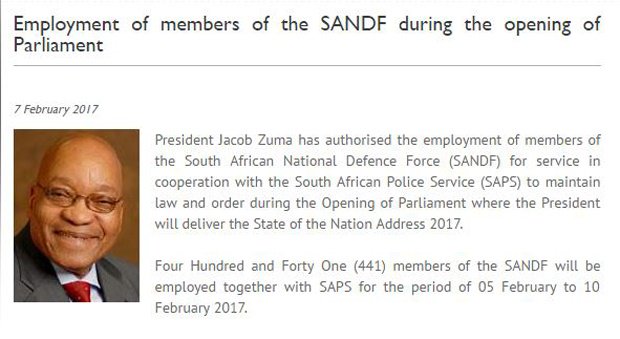 The party was led by Julius Malema, a former youth leader of the ruling Africa National Congress (ANC). The EFF has been on a collision course with Zuma who they have repeatedly cast criminal aspersions against.

The party won parliamentary seats in 2014 and have since clashed with the ANC on matters relating to President Zuma. They are known to jeer and boo Zuma whenever he appears before the legislature.

Sometime last year, Zuma had cause to complain to the leadership of the house that he was not happy the way he is heckled especially by the EFF.

“Each time when I come here, I am abused by members of your parliament, because instead of answering questions I sit here being called a criminal, a thief. I think this house must do something about it,” he said in parliament.

At Zuma’s address in 2015, parliamentary security guards disguised as waiters physically removed EFF members from the chamber, but this is the first time soldiers will be deployed as security rather than a ceremonial role.