Nigerian talentd artist/ YBNL boss says he decided to address fans’ state of mind in the new song ‘Oil & Gas’ and noted that he’s neither broke nor financially incapacitated.

“I’m not broke rather it’s actually a way of saying the people’s mind in my own way with my own sound, with my own story and my own people,” Olamide told Elumelu on the web series, ‘Exclusives’.

The recording artist and record label exec, in a 14 minutes long video, told Elumelu how frequent financial requests from fans and followers on Instagram necessitated his decision to write his new song, ‘Oil & Gas’.

Explaining in details, Olamide says, “It’s my own way of reaching out to people to make them understand that sometimes what you see can be deceiving and when people on the streets see you, they are asking for help or money.”

“When I wake up every morning I check my DM, I am the type of guy that takes his time to check his DM to see if there are really one or two people that needs serious help but it’s all about send me money, send money to my account, you know you can teach your guys how to fish but it’s now left for them what they want to do with the fish, do you want to sell it, fry it and eat it, do you want to smoke it or roast it, so if I give a million Naira, what becomes of you after then? What you do to turn around the money all depends on you…So, I had to find a way to communicate that message by singing from their perspective about that situation. I’m trying to put myself in their shoes singing about what they do to me by saying give us money.”

When Elumelu asked how the fans have embraced the song, Olamide noted that most of them don’t understand the meaning of the song.

“Many of the fans are enjoying the song but I know most of them don’t understand the meaning and that is why I’m trying to break it down. Some of them think I’m singing about me being broke, but I’m not broke, I’m only singing in their voice and representing their views” he said.

Olamide was quick to correct Elumelu that mentioning his name and other billionaires were not to help give his fans jobs or help them financially.

“Now, the cruise is I am using my own situation, my friends, my people and the people I appreciate, people I look up to are the ones I’m calling. It’s just the same way a regular guy looks up to me and request for funds, the same way I’m using a relative picture of people I know.“

The chat further extended to the creation and popularity of Shaku Shaku and Zanku dance steps.

Olamide explained that creative entertainers like himself decided to pick parts of what has made the Nigerian streets unique and refine it into what the world has now accepted as Nigerian dance steps.

Obviously impressed by the achievements of Elumelu,Olamide says no young Nigerian entrepreneur will fail to admire Elumelu.

“You can not be a young entrepreneur and not admire the brand, Tony Elumelu either you are a close friend or not. He’s one of the people motivating so many young entrepreneurs right now and we really look at him like, yo, this man is not getting old any time soon,” he says. 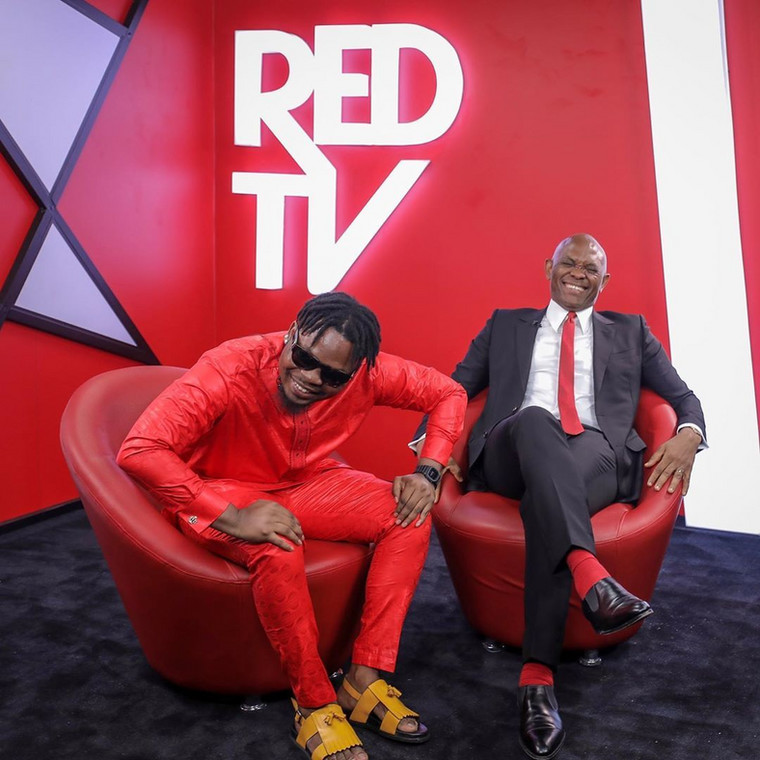 In his conclusion of Olamide’s personality, Elumelu said, “Olamide is very inspiring and a living entrepreneur. He’s an exemplary one, I mean, everyone should look up to people like this (Olamide). I look at his music and we get entertained but telling us about the idea behind it, it is all about propelling the next generation, encouraging people and those who don’t have jobs telling them it’s not about subsistent living but how you can create value and move your life further. And if you look at his case, he was a student not long ago and now he’s doing so great.

“You (Olamide) are very inspiring, you are a role model to our younger ones and I can see in you greatness. I want you to continue what you do by bridging the gap between the rich, middle and low class and let people use your voice to shape a better Nigeria, better Africa and better society at large,” he concluded.

The words of Elumelu puts Olamide in a different light as not only one of Nigeria’s biggest music stars but also a young entrepreneur that might be making big impacts in the business world.