Anyaoku said the late Head of State had informed him that he loved Nigeria dearly and was ready to lay his life down for the country.

He spoke on Sunday at an exposition series tagged, “God in my life,” organised by the Touchbearer Society of the Archbishop Vining Memorial Church Cathedral, Ikeja, Lagos.

According to him, the fact that former President Olusegun Obasanjo escaped being killed by the late Abacha, was a testimony of God’s grace in his life.

Anyaoku said, “There have not been many people who were saved from the jaws of death as our distinguished speaker (Obasanjo). And as he rightly acknowledged, he was saved by the grace of God.

“I happened to be in a position, where I was one of those very concerned at the time about his fate. I believe, your Excellency, that the first sentence that (the late Gen. Sani) Abacha’s so-called military tribunal passed on you was death. And Abacha commuted it only after he was visited by two heads of state that I had joined in appealing to, to come and see Abacha. They were the President of Zimbabwe, Robert Mugabe and the President of Uganda, Yoweri Museveni .

“Before then, I had persuaded Mr. Nelson Mandela to send his Deputy President, Thabo Mbeki. Thabo Mbeki came and spent about three hours with Abacha, returned home and Nelson Mandela called me to say that the mission had not succeeded. But it was not until these two presidents came and spent three hours and 15 minutes with Abacha, and when they left Nigeria and returned to their countries, one of them then phoned me to say that all that Abacha showed them was a video, alleging that our very distinguished speaker was part of a phantom coup. But these presidents said to me that there was no evidence.

“I must say my last telephone conversation with Gen. Abacha was the day he detained you (Obasanjo). I called him to say that that act in itself was the greatest disservice to our country. And Gen. Abacha said to me, ‘Your Excellency, but you know I love this country and I am prepared to die for this country.’

“And I said, rather jokingly, to him, ‘Your Excellency, you know that I am older than you, I have loved the country longer than you have.’ He then said, ‘We’ll, if I can’t convince you, there’s no point anymore in this telephone conversation.’ And then he dropped the telephone.

“That was my last conversation with Gen. Abacha. But I can tell you that the release of our honourable speaker of today gave the whole world immense pleasure. Because at one time, no less than 60 heads of state including a former American President wrote a letter to Gen. Abacha, calling for his release.” 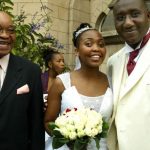