The singer who is generating Oscar buzz for her role in “Mudbound” discussed how the role helped stripped her of her vanity. She said:

I didn’t realize how vain I was until I started working on Mudbound. Once I saw how my character, Florence, lived [in a shack on a farm in Mississippi], I thought, ‘Wow, I’m really a vain person’.

When I went to the movie set to do the first day of fittings, I was Mary J. Blige: I had just done a tour and a show, so I was all, you know, I had wigs and weaves and all sorts of things going on, and Dee Rees was like, “No! We want to see you. You can’t have a perm, you’re going to have minimal, minimal makeup.” And I was like, “What about lashes?” And she said no, and I was like, “Really? Florence doesn’t have lashes?”

That part was a lot! A lot! But once I tore away and sunk into the character, Florence actually gave Mary—me, the so-vain person—a little more confidence so that Mary didn’t feel like she needed to depend on all of that. I cut my hair really short. Florence really liberated me.

Mary J. Blige also discussed her divorce. Asked by Weems where she sees herself going and what she wants now, she said:

I want, at some point, to not have to work so hard. I want peace of mind and acceptance of self, totally.

I know that’s an ongoing process, so every single day I’m working on that, and it’s been hard ever since this challenge I’m having with this divorce.

It was such a terrible thing. It made me see myself as “I have to be better than this”: I was never good enough; I was never pretty enough, smart enough. And there was someone chosen over me.

It was like, I can’t stay, but it really let me see, Mary, you are better than that. You have to continue to grow. 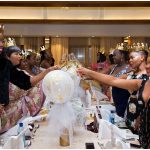