On Friday October 13th 2017 police in Nyanza went on rampage shooting and killing Nasa protestors. The killings and the brutality meted upon demonstrators specifically in Luo inhabited areas has been interpreted as selective targeting of Luo people by the government.

We have many common friends and thus my choice not to have criticized your leadership style. But I also out of own style of engagement, don’t personalize criticism. I critique systemic and institutional problems. But the killings today in Bondo of unarmed demonstrators, beating up of a pregnant woman going to her business and throwing tear gas into a kindergarten broke my heart.

Being our Minister for Internal Security in addition to being Minister for Education may have bloated your ego. Many of your Cabinet colleagues are either my clients and/or friends. They tell me they call you out of sarcasm Super Minister and that you strut to Cabinet Meetings with near condescending attitude to them.

Anyway, what Police is doing under your watch is deeply regrettable. You maybe a Jubilee Super Minister, but all including yourself are under the Constitution. The Police cannot be going to Luo inhabited areas in Kisumu and Nairobi as though they are going to Boni Forest in Lamu. You can’t restrict NASA demonstrations that are lawful, but allow Mungiki calling themselves Nairobi Business Community to counter protest without license. Don’t do tribal profiling of the application of the law.

For now, power may blind you to believe that it is permanent. Calling NASA leaders all kind of derogatory names, withdrawing their security, threatening them with arrest or not being bothered when University students are being raped and nursery students tear gassed may look romantic to you for now, but power is always temporary no matter how powerful and seductive.

And History will show you that across all Empires and even in the Bible, those that rose so high fell so hard. We have a Constitution, respect it. Apply it equally to all and across all Parties. You cannot derogate the Constitution by ordinary legislation or Regulations. Public Security Order is inferior to the Constitution.

Exercise your power but within the Constitution. And remember, History records all. And time doesn’t run against crimes committed by those in power. And you will not plead superior command. The law catches up even in the sunset of your live. Stay advised. Sycophants don’t last.

Luo celebrities have since stepped forth to express their worry with the recent killings in Nyanza. Akothee, Robert Alai, Suzzana Owiyo, actress Odhiambo Opondo have all spoken against the killings.

Akothee: Goodmorning Government, we’ll the country is wondering why I don’t talk about politics , my worry is, I can’t talk about a story that I don’t know it’s head or tail , especially where blood is shed, it’s not a joke as a mother to watch people’s children being Butchered like animals , it’s not easy to see children running helplessly from their classrooms in the name of tear gas, I could not imagine seeing my son rolling on his stomach from lecture rooms looking for help , it has been a terrible year for parents , families entrepreneurs and the country as a whole , I stopped watching news for it makes me helpless and sad, now seeing innocent people fished out of their boda bodas, beaten, their only source of income destroyed! I mean this is uncouth, if you could know how Kenya is depicted in the outside country you could find a solution to this blood shedding, I don’t know what will happen to the tourism industry ,lets not lie to each other ,the tourism industry has been affected 100%, no one would like to visit a country with security instabilities,secondly , companies will retrench employees , there is no business so what do you keep employees for? This means another shock to the family and society at large, I believe Kenyans have democratic rights so they should be allowed to exercise it peacefully, and security provided for them not vise Vasa, it’s a pity that we only have 2 standards of living in kenya , very rich and very poor , the middle class don’t have opportunity to grow , they are the ones leading the most difficult life , eating from hand to mouth , they could be having good jobs but Kenya has become more expensive than Switzerland, we should not exercise our hunger & greed for power on our common mwananchi. My Kenya is lonely and as a Kenyan, I get goose pimples when I see those men in black heads, combats, and gumboots , I only see death and not Security when I see them ! how about children living in this affected areas ?what do you think is going on in their brains? so you already know we are raising a bitter generation , the effect will only be seen in the future generations PRAY FOR KENYA
#someonetellthegovernement . 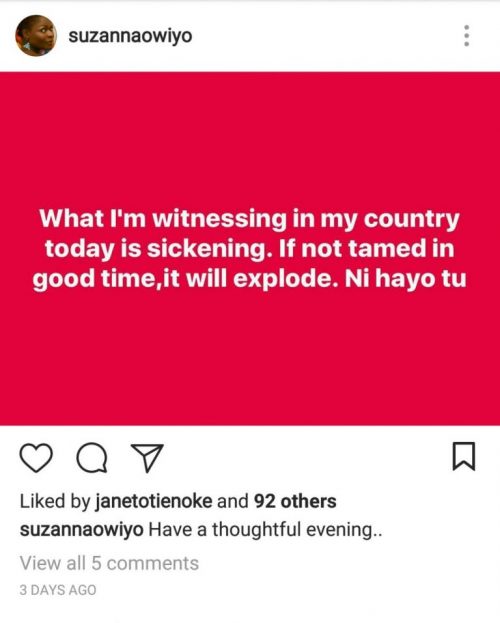