Angolan President Joao Lourenco on Wednesday fired his predecessor’s daughter, Isabel dos Santos, from her influential post as head of the Sonangol state oil company, the presidency said in a statement.

Her appointment to the oil giant last year was widely criticised as a symbol of the nepotism and corruption that flourished under Dos Santos.

Lourenco swept to power as the ruling party’s candidate in August elections after pledging to clean up Angola’s endemic graft and revive its listless economy. 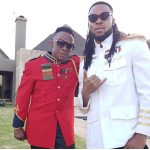